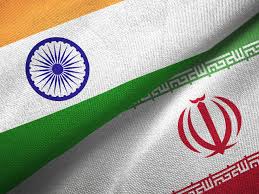 During the Cold War, the geopolitical tension hampered the relationship between the erstwhile Imperial States of Iran and the Republic of India, though in 1950, on March 15th the nations shared a diplomat relation. Since then the two nations share a reciprocal relation.

From the economic perspective, Iran is the second-largest supplier of crude oil to India, supplying more than 425,000 barrels of oil per day, and consequently, India is one of the largest foreign investors in Iran’s oil and gas industry.
From the geopolitical perspective, though both India and Iran share similar strategic interests, both differ on key foreign schemes. India strongly opposes Iran’s nuclear programme and India’s disagreement with the presence of The North Atlantic Treaty Organization (NATO) forces in Afghanistan contradicts Iran. Though both the nations are on the same page when it comes to oppose Taliban.

Iran acts as a membrane between the two rival countries, India and Pakistan, as it is in good terms with both the nations.
The thriving number of Iranian students enrolling in the Indian universities enhanced the relationship further. In the 1990s, India and Iran both were in support of the Northern Alliance in Afghanistan against the Taliban regime.
Iranian ambassador Ali Chegeni said, “India usually plays a very good role in peace in the world. At the same time, India belongs to this region. We welcome all initiatives from all countries, especially India as a good friend for us, to not allow escalation (of tensions)”. He also added “We are not for war, we are looking for peace and prosperity for everybody in this region. We welcome any Indian initiative or any project that can help peace and prosperity in this world.”


USA and Israel, the two greatest enemies of Iran will never help in Technological advancement and innovation in the country. China is in alliance with Pakistan and Russian will be an extravagant help for Iran. Therefore, the nation is left with the only option India, but only at the cost of Chabahar Port and investment opportunities.
India and Iran’s strategic partnership has significantly put in place military and energy deals estimated over $25 billion. The wide-ranging cooperation involving all three military services is quite a turnaround in the existing strategic situation in Southern Asia, especially since the last two decades.

Defence ties between India and Iran further evolved post-signing of a Memorandum of Understanding (MoU) on defence cooperation in 2001. It was in the same year that India’s Defence Secretary, Yogendra Narain, met his Iranian counterpart, Ali Shamkani, and supposedly discussed arms sales to Iran including Indian Konkurs anti-tank guided weapons and spare parts.

According to reports, India will be, as stated, given access to Iranian military bases in the event of a war with Pakistan.
Iran’s affable gesture towards India will help in re-grooving the military defence of the latter.