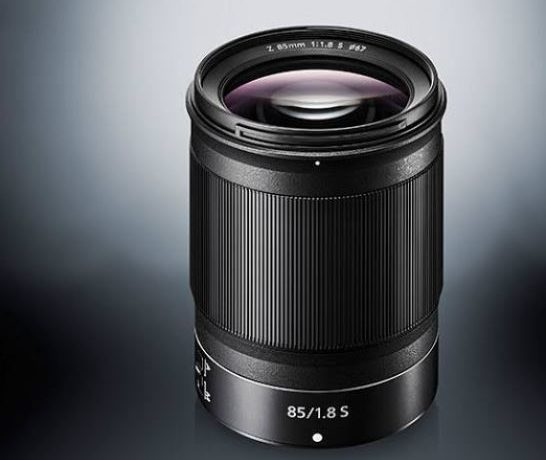 This is the third prime lens Nikon announced with the Z-mount, the other two having a focal length of 35mm and 50mm. Thus, the introduction of this lens completes the three classic primes. All have a moderately large aperture of f/1.8 and are a part of the premium S-series lenses. These are designed for high performance with tight quality standards. The 85mm is technically a short telephoto lens and is preferred by many for portraiture as well as general-purpose photography work.

This lens uses the same ‘hybrid’ construction like the other ‘S’ lenses, where the bottom part of the lens uses a metal barrel while the rest of the shell is of polycarbonate. It also shares the same cylindrical ‘coke can’ contours. A rubber ring around the mount and other seals present make the lens fully dust and moisture-proof. There is just one large ring, and this is customizable for a variety of functions. Lastly, there is a switch for AF/MF selection and that’s about it.

The lens has a maximum aperture of f/1.8. Optically it uses 12 elements in 8 groups. Of these two are low dispersion ED elements. There are no aspherical elements, possibly to avoid onion ring bokeh. Other features that are also standard on the S-series lenses are Nano Crystal and Super Integrated Coatings, an electronically controlled diaphragm and a silent stepper motor. The diaphragm is made up of nine-rounded blades to give a good bokeh. Filter size is widely used 67mm. The lens is larger and heavier than the Nikon D-SLR lens of the same focal length and speed. There is no image stabilization as that is taken care of by the Z-camera bodies.

The optical performance was excellent even wide open as claimed by the manufacturer. The AF was silent, fast and snaps instantly. The eye-detect focusing mode also works well, once the eye is detected. This needs the photographer to be sufficiently close as else the camera switches to face detect. When the super-accurate Pinpoint AF area mode is used, the AF cycle is a tad slower as the camera performs an extra step using contrast detection. This mode is generally not needed unless you are focussing very close with the aperture wide open when DOF is very shallow. Bokeh fans will not be disappointed too, as the out-of-focus objects are rendered very smoothly. The micro-contrast of the lens is excellent as it brought out the skin textures very well without undue harshness. These last two factors made the subjects pop against the background. Chromatic aberrations were imperceptible even fully open and we are not a concern at all. The same is the case with distortion. While vignetting is not a major issue for portrait lenses, it was present mildly fully open but is of no concern from f/2.8 onwards. Colors have excellent fidelity and are consistent with other  Nikon stable. The flare control was excellent, and there was only slight veiling if a very bright light source was in the frame. This lens exhibits superb sharpness at the center even wide open. In fact, it begs to be used that way. There is a very slightly improvement in the edge sharpness as you stop down till about f/4, and thereafter the sharpness across the frame starts reducing due to diffraction. For portraits, I will suggest you guys to put your aperture of f/2 or f/2.2 to increase the DOF by a smidgen to compensate for any slight movement of the subject.