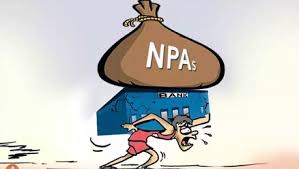 Mostly assets which are non-performing for more than 36 months are automatically considered as lost assets. These assets are mostly written off by subtracting any recovery value of the security which has been held by the bank.

CAUSES OF NPAs:
• WILFUL DEFAULTERS: A wilful defaulter is a person or an organization which has defaulted in meeting its loan obligation or repayment obligation to the lender like bank even when it can honour these obligations.
Kingfisher Airline is an example of a Wilful Defaulter. These are the most dangerous form of NPAs and usually a company criminal proceeding against the defaulter.

• INDUSTRIAL CRISIS: It is one of the external factors affecting NPAs in the country. Industries depend on banks to fulfilling their requirements on funding their several projects. In case of a crisis in the industry, companies may find it difficult to pay back their liabilities which puts them into the NPA zone. One of the reasons for the mounting of NPAs in Indian banks in the last few years there were slow growth in the capital goods industry, like metals, engineering, infrastructure, and others.

• LENIENT LENDING NORMS: It is one of the prime reasons for growing NPAs. Over-estimation of financial status and credit rating by banks for famous industry names are another reason behind the matter.
Amtek Auto fits in this category where both credit rating agencies and bank overestimated their credit worthiness.
• CREDIT DISTRIBUTION MIS-MANAGEMENT: Misuse of funds by the borrowers is another reason for the growth of NPAs. These are borrowers who bribe the bank officials and get the loan approved with the sole intention of default. Clearly Nirav Modi’s company falls under this category.

HOW TO CONTROL NPAs:

A number of recovery steps are hastened in order to cut down NPAs of banks. The Insolvency and Bankruptcy Code 2016 (IBC) has been executed by adopting a creditor-in-saddle approach along with the interim resolution professional taking over management of affairs of the corporate debtor at the outset. This, along with debarment of wilful defaulters and persons related with NPAs has effected a crucial change in the creditor-debtor relationship. The Banking Regulation Act, 1949 has been rectified to provide authority to RBI to advise the banks with the insolvency resolution process under IBC. After following the way shown by RBI, 39 large fraud cases, amounting about Rs. 2.69 lakh crore, were exposed.
The Securitisation and Reconstruction of Financial Assets and Enforcement of Security Interest Act, 2002 have been revised and made more rigid with the arrangement of three months of imprisonment if the borrower fails to provide asset details and the lender can take over the mortgaged property within 30 days. Six more Debts Recovery Tribunals have been implemented for thorough scrutiny.

Public Sector Banks have generated accentuated asset management for a speedy recovery, restricted pre and past sanction follow up roles for deep audit, started online one-time settlement platforms and for loans of large value like Rs. 250 crores and above stern surveillance set up has been initiated.
According to Shiv Pratap Shukla, former Finance Minister, the above-mentioned steps helped NPAs and SCBs reduced by Rs. 2,57,979 crore.