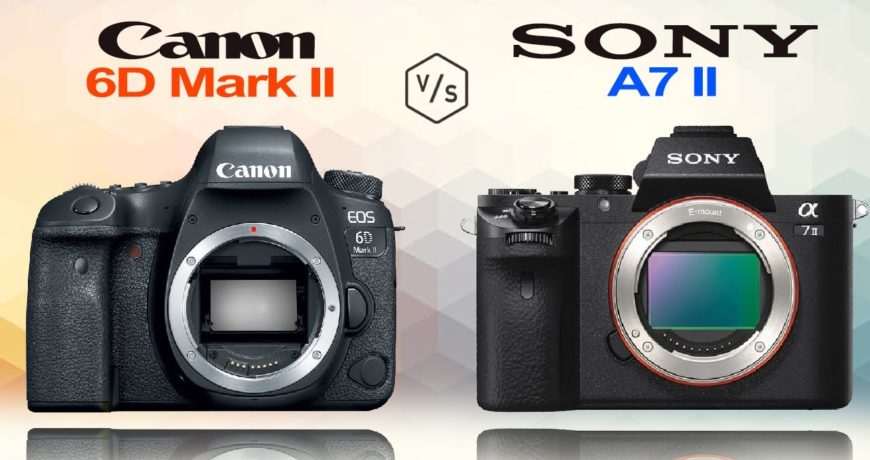 COMPARISONS BETWEEN SONY A7R MARK II AND CANON 6D MARK II:
In the race between DSLRs and Mirrorless camera, the winner is the latter. Here is the comparative study of two best selling cameras- Canon 6D Mark II and Sony A7R Mark II.
• Body Comparison:
The front view of Sony A7R Mark II is notably smaller than Canon 6D Mark II. The A7R Mark II is about 18% lighter than the latter. Both cameras have similarly sized sensors, but DSLRs have a larger flange-to-focal plane distance than mirrorless cameras, which imposes constraints on the optical engineering process and generally leads to bigger and heavier lenses.

• Battery life:
The 6D Mark II gets 1200 shots out of its LP-E6N battery, while the A7R II can take 290 images on a single charge of its NP-FW50 power pack. The power pack in the A7R II can be charged via the USB port, which can be very convenient when travelling.

• Feature comparison:
Beyond body and sensor, cameras can and do differ across a range of features. For example, the A7R II has an electronic viewfinder (2400k dots), while the 6D Mark II has an optical one. Both systems have their advantages, with the electronic viewfinder making it possible to project supplementary shooting information into the framing view, whereas the optical viewfinder offers lag-free viewing and a very clear framing image. The viewfinder in the A7R II offers a wider field of view (100%) than the one in the 6D Mark II (98%) so that a larger proportion of the captured image is visible in the finder. In addition, the viewfinder of the A7R II has a higher magnification (0.78x vs 0.72x), so that the size of the image transmitted appears closer to the size seen with the naked human eye. The adjacent table lists some of the other core features of the Canon 6D Mark II and Sony A7R II along with similar information for a selection of comparators.

• Connectivity Comparison:
It is notable that the A7R II has a headphone jack, which makes it possible to attach external headphones and monitor the quality of sound during the recording process. The 6D Mark II lacks such a headphone port.
 ADVANTAGES OF THE CANON EOS 6D MARK II:
• Better moiré control: Has an anti-alias filter to avoid artificial patterns to appear in images.
• Brighter framing: Features an optical viewfinder for clear, lag-free composition.
• Easier setting verification: Features an LCD display on top to control shooting parameters.
• More flexible LCD: Has a swivel screen for odd-angle shots in portrait or landscape orientation.
• Fewer buttons to press: Is equipped with a touch-sensitive rear screen to facilitate handling.
• More selfie-friendly: Has an articulated screen that can be turned to be front-facing.

• Faster burst: Shoots at higher frequency (6.5 vs 5 flaps/sec) to capture the decisive moment.
• Easier time-lapse photography: Has an intervalometer built-in for low-frequency shooting.
• Longer lasting: Can take more shots (1200 versus 290) on a single battery charge.
• Easier geotagging: Features an internal GPS sensor to log localization data.
• Easier wireless transfer: Supports Bluetooth for image sharing without cables.
• More affordable: Was introduced into a lower priced category (38 per cent cheaper at launch).
• More modern: Reflects 2 years of technical progress since the A7R II launch.
 ARGUMENTS IN FAVOUR OF THE SONY ALPHA A7R II:
• More detail: Has more megapixels (42.2 vs 26MP), which boosts linear resolution by 27%.
• Maximized detail: Lacks an anti-alias filter to exploit the sensor’s full resolution potential.
• Better image quality: Scores substantially higher (13 points) in the DXO overall evaluation.
• Richer colours: Generates noticeably more natural colours (1.6 bits more colour depth).
• More dynamic range: Captures a broader range of light and dark details (2 EV of extra DR).
• Better video: Provides higher definition movie capture (4K/30p vs 1080/60p).
• Better sound control: Has a headphone port that enables audio monitoring while recording.
• More framing info: Has an electronic viewfinder that displays shooting data.
• More complete view: Has a viewfinder with a larger field of view (100% vs 98%).
• Larger viewfinder image: Features a viewfinder with a higher magnification (0.78x vs 0.72x).
• More detailed LCD: Has a higher resolution rear screen (1229k vs 1040k dots).
• Faster shutter: Has higher mechanical shutter speed (1/8000s vs 1/4000s) to freeze action.
• Less disturbing: Has an electronic shutter option for completely silent shooting.
• More compact: Is smaller (127x96mm vs 144x111mm) and will fit more readily into a bag.
• Less heavy: Has a lower weight (by 140g or 18 per cent) and is thus easier to take along.
• Easier travel charging: Can be conveniently charged via its USB port.
• Sharper images: Has stabilization technology built-in to reduce the impact of hand-shake.
• More legacy lens friendly: Can use many non-native lenses via adapters.
• More heavily discounted: Has been around for much longer (launched in June 2015).
The A7R II is the clear winner of the contest (18:13 points).

I would like to share some of the pics click from both the cameras and now it is your turn to decide which is the real winner!! Excited huh!!! Lets gets started…..