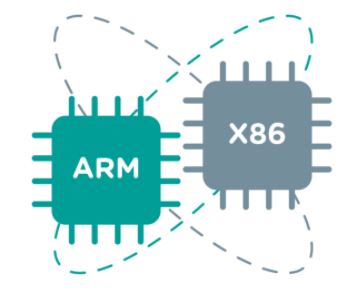 ARM is the latest CPU engineering used by all modern smart phones in both Android and Apple devices. The Arm processor is extending its way into the computer ecosystem with products like windows on Arm and Apple’s upcoming custom CPUs for Macs. On the other hand, Intel is the world’s largest and highest-valued semiconductor chip manufacturer and is the developer of the x86 series of microprocessors, a processor profoundly used in computers.

Applications and software need to be compiled for the CPU architecture they run on, historically the ecosystems like Android on Arm or Windows on x86 don’t have a drag running on multiple platforms or architectures. Apple’s Arm-based Macs, Google’s Chrome OS, and Microsoft’s Windows on Arm are all modern examples where the software must run on both Arm and Intel architectures. Compiling native software for both is an option for brand spanking new apps and developers willing to take a position in recompilation. To apprize the blanks, these platforms also depend on code emulation. In simple words, translating code is compiled to one CPU architecture to run on another. This is comparatively less efficient and thus the performance degrades compared to native apps, but good emulation is currently possible to ensure that apps work.

Smaller CPU transistors consume less power. Intel has been stuck trying to maneuver past its 2014 in-house 14nm process. Back then smart phone chipsets have moved from 20nm to 14, 10, and now 7nm designs, with 5nm expected in 2021. Leveraging competition between Samsung and TSMC foundries cleared off this problem.

One of the most unique features of Arm’s architecture is it keeps TDP low for mobile applications instrumentally- heterogeneous compute. The idea is straightforward enough, that is, to build an architecture that permits different CPU parts (in terms of performance and power) to figure together for improved efficiency.

Throughout the years of Arm vs x86 rivalry, Arm has won out because the choice for low power devices like smart phones. The architecture is now also pacing into laptops and other devices where enhanced power efficiency is in demand. Despite losing out on phones, Intel’s low power efforts have improved in the recent years too.

Arm and x86 remain distinctly different from an engineering standpoint and that they still have individual strengths and weaknesses. However, consumer use cases across the two are getting blurred as ecosystems increasingly supporting both architectures. Yet, while there is a crossover within the Arm vs. x86 comparison, Arm bounds to remain the architecture of choice for the smart phone industry for the foreseeable future.